The coach of a girls' high school basketball team in Texas was fired yesterday. He was fired for winning. 100 to 0! I've been following this story for a few days. People who were present testify that they were running up the score.

This was a Christian school which put the drubbing on a private school. The type of private school for kids who struggle in a traditional learning environment. I know this type of school-my sister-in-law taught at one in Ohio for a couple of years. These girls are not necessarily unintelligent nor unathletic (although this particular group seems to be); they usually have learning disabilities which aren't apparent to most of their acquaintances. Suffice it to say, they probably aren't exactly brimming with confidence to begin with.

Can you imagine losing 100-0? From what I hear, they actually took it pretty well. Anyway, Bravo to the Christian school for firing the coach who ran up the score on these girls. And shame on the coach for refusing to even apologize. Probably he just wanted "to see what his girls could do." Well, to me that's unacceptable, and a symptom of a broader problem I see in high school sports in America. And from a Christian school! What kind of impression will the other girls take of Christianity from this blow-out?

Again, I'm pleased that the administration of the school handled this well, controlling the damage as much as possible. 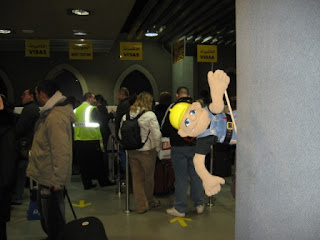 When my family came for Christmas, they brought along Stewart the Puppet. We've been living overseas for over four years now, but I guess puppet shows are 'all the rage' at churches in America. stuffchristianslike even has a post about it. So there are a group of puppets at my parents' church that act out stories and 'sing' to semi-religious songs as entertainment during the service. The puppet show for advent season involved the puppets singing 'Mary's Baby' to the tune of 'Sherry Baby' by Frankie Valli and The Four Seasons.

Before you roll your eyes, you have to remember, 'it's for the kids'. Right. Well, the week before my family came to visit Stewart announced at church that he was going on a trip. All the other puppets were jealous, and now my father is busy preparing a power point to show the congregation this month. I'm going to withhold my thoughts on the use of puppets during a church service, and just let you all enjoy the pictures we took. In any event, this is an interesting way to teach ordinary Americans a little bit about life in the Middle East. Here's to hoping that along with the cute pictures the congregation hears and understands a little more about our Arab friends and grows in compassion towards people they know very little about. 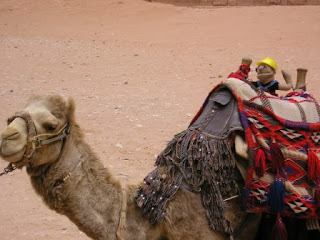 Stewart on a camel. Yes, we do have camels here, though (gasp) most people drive cars. 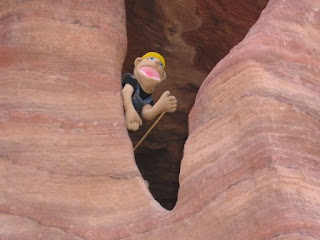 Stewart at Petra. The rose red rocks are beautiful. 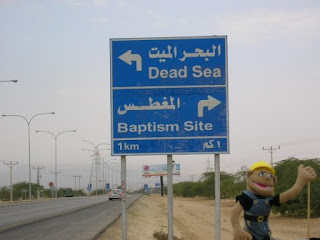 Stewart near the Dead Sea, and just a kilometer away from the site of Christ's baptism. 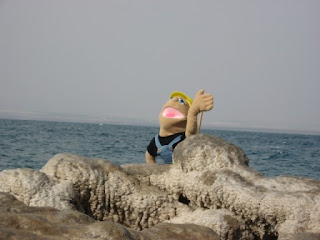 Stewart at the lowest point on earth!
It was cold and windy that day, but some of my family swam anyway. 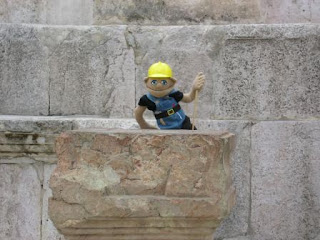 At the downtown Roman Amphitheater that is 2000 years old. 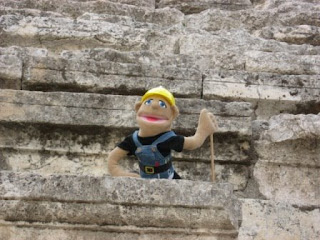 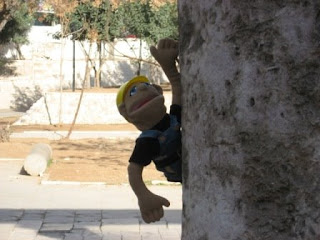 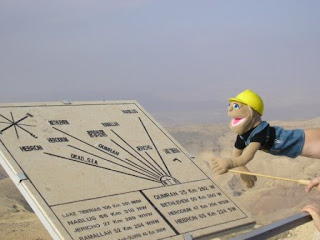 At Mount Nebo. Even in December we managed to get there on nice, clear, day. 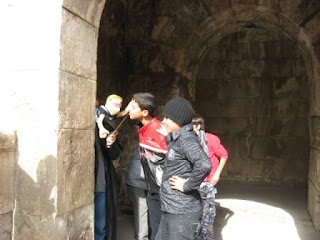 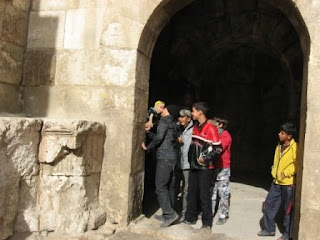 Some local boys thought Stewart was pretty cool, too. 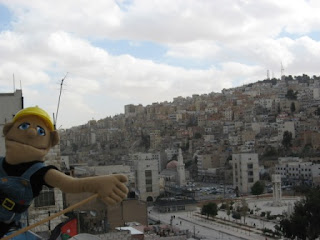 A view of Amman from Jabal al-qali3 or the Citadel. 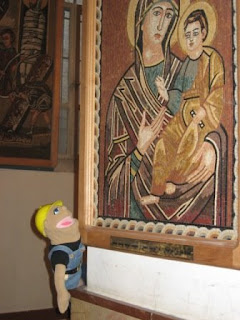 Mary and the Christ-child at the Church of the Map in Madaba. 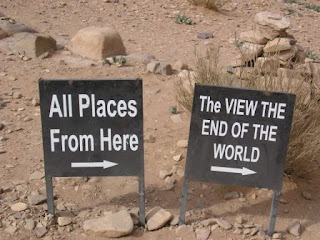 As mentioned earlier, Um Tulip's family came for the Christmas holiday. The following are some of the funny pictures we took during that time. Some of them even compete with Mommabean's photo posts from November. Since missing out on the "blue crap" in the seafood section of Carrefour we've been trying to bring our camera with us lately to snap some of the hilarious things we notice around town. In reality, it is amazing how much English is found and how often things are spelled correctly, as my bro-in-law noticed as we walked around Jabal Amman. 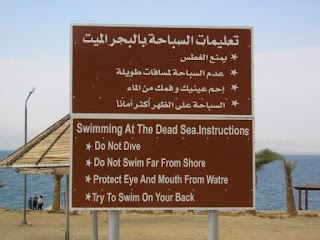 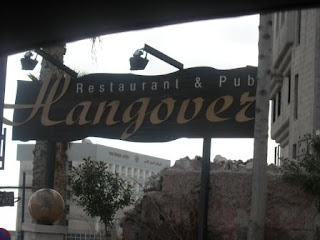 The only redeeming value of this Pub is that it is not spelled "pup or bub or bup" all three which exist in our city. In addition, Abu Tulip took some photos of a couple stores around town. 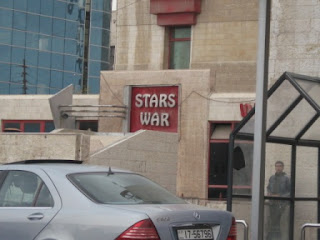 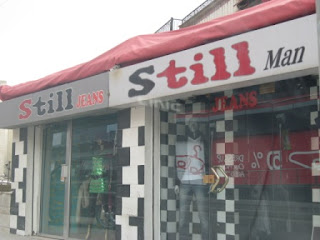 For 'Still Jeans and Still Man' there are two ways to understand this. It could mean 'it's still jeans, it hasn't changed'. Or 'the jeans and the man are still, as in not moving'. The mannequins in the window make me think it's the latter.

Many of our friends are asking us about the situation next door. If you are local, check out 7iber and Kinzi for suggestions. If you are an American, look beyond the local media and remember that to be anti-Semitic is to be anti-Arab as much as anti-Jewish. Arabs are Semitic, too! Gaza is so densely populated the bombs are killing woman and children quicker than I can bear to imagine. Just Thursday our Teddy Bear had minor hernia surgery. He was under general anesthesia for just an hour, but the fear of losing my little boy was overwhelming. When I read the news I can't help but weep for the mothers.

As I mentioned a few posts ago, Jordanians are showing beautiful generosity and unity as we struggle to deal with the crisis. Tonight we heard a discouraging report from the Al-ahli hospital run by the Anglican Diocese of Jerusalem, which is right in the heart of Gaza. All the of windows of the hospital have been blown out due to the bombings, and there is no plastic available even to temporarily keep out the cold. Basic medical supplies are in extreme demand, as are staples like food and water. On a positive note, 40 tons of aid has been able to get through due to the actions of 7iber and the Action Committee.

A friend of mine also posted some links of a couple you tube videos which are worth mentioning. The first is a song written for Gaza with some difficult images, but many of us need to view these images and take them to heart. It's called, 'We will not go down'. The second is of one my favorite artists, Fernando Ortega, singing a song called 'Light of Heaven'. While not written about Gaza, the words speak for themselves.

"Light of Heaven, Lord of Mercy
Shine the goodness of your love upon this day
'til we see you, 'til we know you,
'til the darkness and the sorrow fade away."

On the throwing of shoes

It may be old news by now, but I'm sure everyone's heard of the "shoe-throwing incident." To most Westerners it probably sounds very odd--did this guy suddenly want to throw something at Bush and his shoes were the only thing handy? Indeed, here in the Middle East throwing one's shoes at someone is one of the most insulting things one can do. Apparently, it's become a trend. A large group of protesters threw their shoes at UK Prime Minister Gordon Brown's residence earlier this week.

You might know that there are certain ways you should sit and not sit in the Middle East. One should not sit cross-legged with the bottom of his shoe pointed at the other party (unless of course he wants to offend him). And, take note: it's not the bottoms of the feet that offend, it's the bottoms of the shoes.

I was once involved in a shoe-throwing incident. A few years ago, when we were quite new here, Um Tulip, Oliver and I went by taxi with another foreigner to Mahatta, a poor and densely-packed area of town. As our taxi passed through one of the busiest intersections, our taxi driver apparently cut off another taxi driver. Shortly afterward, we heard the word حمار ! (hmaar -"donkey" only not quite as polite) and heard something hit our car. Realizing it was a shoe, our friend quickly said, "Let's get out of here!" threw some money at our driver and led us away on foot. I'm not sure what sort of brouhaha ensued afterward, but it may have ended in a bloody nose or (if our guy didn't like his chances) a very bruised ego.

true humility and grace in this incident.


It probably looked like this, in black; Arab guys love this style.
Posted by abu 'n um tulip at Tuesday, January 06, 2009 1 comment:

Which one are you again?

Those of us who live here know that it's common for street-cleaners to knock on doors requesting payment during the holidays. Well, during this Christmas-time, four different men came to our door requesting money for cleaning our street—but only one of them actually does the work. Since they almost always work in the morning, when we are out, we rarely see them, so I’m not entirely sure which one is “our guy. They each look vaguely familiar, but perhaps I’ve seen them down the street. And they didn't really seem to come by looking for payment consistently until this year.

I’ve paid a couple guys, and narrowed “our guy” down to two possibilities, one of which I’ve not yet paid. These men work hard for very little, so they need everything they can get. Each have people back in Egypt depending on them as well. I am starting to think they go to neighborhoods outside their assigned area to “try their luck.” And not paying someone who is deserving would be wrong and give us a bad reputation.

Sure hope I pay the right guy!

You do the math

I'm struggling with words. I'd love to write a Happy New Year blog or post some darling pictures from our Christmas holidays with family. We had an incredible visit, and managed to see many of the great sites of Jordan. It's been an emotional roller coaster, as I hadn't seen my parents or sisters or bro-in-law for 18 months. I can't express enough the gratitude I feel to my parents for footing the bill of this amazing vacation.

However, the situation in Gaza is overwhelming. The latest news flash I read was 390 Palestinians dead, 4 Israelis. You do the math. I just can't understand. I've often been touched by Arabs' grace and sensitivity to me as an American, even in the face of injustice. I'm not going to write much; just recommend you read up on what Kinzi, Mommabean, Pilgrim Without a Shrine have to say, or follow their links.

We happened to be en route to the airport the night of the relief for Gaza drop-off and drove right through the intersection near Cosmo as the evening was ending. There were still swarms of people loading up boxes. Somehow I just had a feeling it was people donating goods for Gaza. There were no signs, and as I've been entertaining family I hadn't yet read about the efforts organized by the Action Committee and Jordanian bloggers. However people weren't honking or yelling, which is incredibly unusual here during a traffic jam. It was such a beautiful demonstration of unity and generosity.