After a six month hiatus, I'm hoping to actually rejoin the blogging world.  I've been following my faves all season, but didn't have the emotional energy to actually post.  Reverse culture shock is a complicated bear.  We just got back home after spending six months in the states.  There have been so many things I've thought about posting, but haven't.  Maybe I'll make good on my New Year's resolution to post about all my cultural observations.

Talking with a friend a couple weeks ago gave me the perfect title, and last night I found the perfect image.  Cultural whiplash describes for me the experience of going back and forth from a lovely but overly WASP area of America, to our bustling city in the heart of the Arab world.  Two lovely places that don't really understand each other, but places I love dearly, and am proud to call both home. 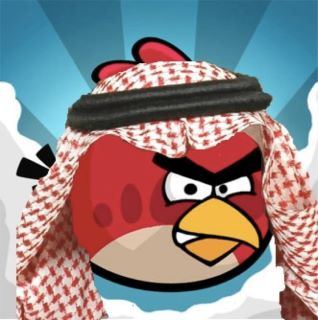 My boys became enamored with angry birds this past season, as it has inundated American culture.  We have the card game by the makers of UNO, the plush toys, and a "real" game with plastic figures and beams so you can re-create the hit game played by young and old on smart phones, tablets, and computers.  Last week the boys threw their plush toys off the top of the bunk bed to knock down structures, a normal fun activity for my kids.  However, this time they told me they were playing "angry birds".

I still don't really understand why the birds are angry, but cultural whiplash is indeed full force.